April 28 th 2013 ,on our way to the great America, Milan Malpensa direction Washington DC.
During the Micri study tour to Washington DC and New York not only we have had the chance to analyze into more details some issues already discussed in class, but we also had the privilege to meet several important delegates, officers and functionaries working in international organizations, institutions and embassies as well as visit their headquarters.
My report is to focus on two meetings that have sparked my interest in a particular way, both meetings were held in the city of Washington DC.
the first meeting I want to talk was at the offices of Weber Shandwick-Powell Tate, and workshop was about the corporate communication. The workshop was held mainly by director Gregory Field Price with the assistance of Dott.ssa Rachel Ryan (healthcare policy division Powell Tate) and two other coworkers,in which it was explained how it works within Weber Shandwick, and what the relationships are customer-team and across teams themselves. A division of Weber Shandwick, Powell Tate is a global network of partners who create and execute communications campaigns of all shapes and sizes for clients ranging from industry giants to local businesses, and is one of the most respected agencies in Washington DC.
What struck me about this meeting was mainly the enthusiasm with which it was held the workshop,and at least people present had a good working position despite their young age,Italian companies should be based more on U.S. models.
The second meeting that really excited me was the one held at the World bank of Washington DC.
The building of the World Bank was a modern and shimmering glass and steel building hosts thousands of people of all races and nationalities, speaking every possible language on earth,they also have a cafeteria offering different types of cuisine, from the African to the Japanese and yet another, impressive and definitely not a common place to work in. Our meeting was held at a meeting room where we had the chance to know the Brazilian head speaker for World Bank Angelica  Silvero who told us about the effective Role of the WB and showed a presentation about an overview of the history of this organization from its very beginning, concentrating on the its role and functions.
I was very pleased with this meeting, especially because I finally figured out the actual task of world bank,and was given to me with enthusiasm the message for which the institution is a carrier. At the end of our meeting we finally exposed the project “Connect4Climate” in which our class has been involved during the academic year.
Connect4Climate is a project of the World Bank in charge of involving young people through contests published on the official website, with the goal of making conscious about the seriousness of climate change in the world and its impact especially in the poorest areas.
The study tour has really been a useful tool to experience “first‐hand” the international relations and communication environment we studied during the academic year,and has also been a life experience that has allowed us to know each other better in a context outside of the university.
Silvia Chiesa Micri student 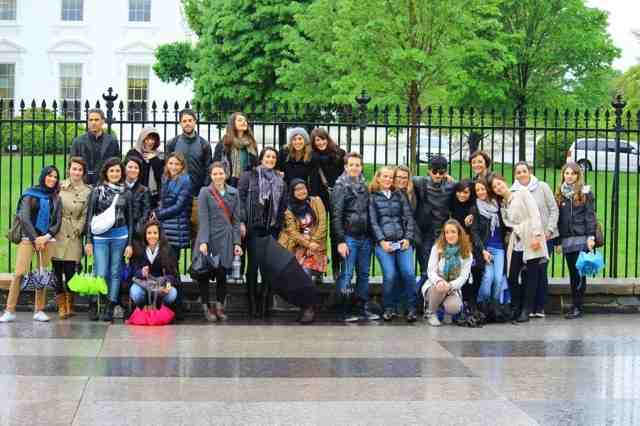